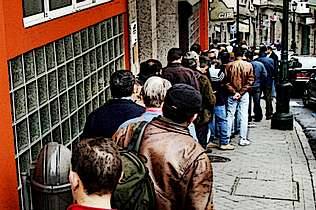 There are children who believe that Vigo go out to eat restaurant every weekend. Van with his parents at an establishment in Teis, who once was a steakhouse called Mautte Grill. Today is a soup kitchen, but it looks like [a restaurant]. Because they spoil every detail so that the guests feel comfortable and, above all, to know that children do not feed them charity.

He tells me my friend Richard, who is vice president of dignified life, the heroic NGO that manages the dining room where lunch every weekend no less than five hundred people without resources, they are, increasingly, middle-class Vigo impoverished by unemployment.

The menu on Saturday, was composed of various appetizers, rabbit casserole and for dessert, peaches in syrup.

The restaurant is divided into two parts. In the general area, they will eat alone. But the former smoking area has been enabled for families. Everything there is to look identical to a restaurant. Children should know they are [not] eating at a local charity.

To accomplish this, volunteers act as waiters. Serve each dish and remove all the tables. He goes to see if the food is to your liking. And instead of canned peaches, the desserts are sung to a modest letter, so the kids can choose between ice cream, yogurt, pineapple, pudding, fruit or other Lambon, which is reserved for this area between donations do business in the city.

He tells me yesterday my friend Ricardo, while drinking a beer, and I find it exciting. The story has something literary. And I suppose that those children will understand someday Vigo, and higher, where they were going to eat with their parents. And how hard is life. And that is this fucking crisis.

Decent Life, which belongs to the Evangelical Church located in Vázquez Varela, moves every weekend to two dozen volunteers to serve the restaurant. The staff are caring professionals from various sectors. That, when touched, are converted into waiters. I have the honor of meeting a highly regarded surgeon who puts on the apron and takes the tray as if it had the title of the School of Hospitality. We will not say it seems to El Bulli, but there is a xeito.

The next weekend, Vida Digna has a new challenge. On Saturday, will provide lunch and dinner, because Christmas falls on that day. They will have to redouble their efforts. For that night, are finalizing the menu: appetizers, shrimp, veal baked desserts and Christmas treats.

I’d say what company donates seafood, but do not let me. Everything is anonymous and disinterested. For some children from Vigo to dinner on Christmas Eve will go to that restaurant where, every weekend, their parents are eating out.

[via Martin Varsavsky on Twitter, who just blogged about it himself]