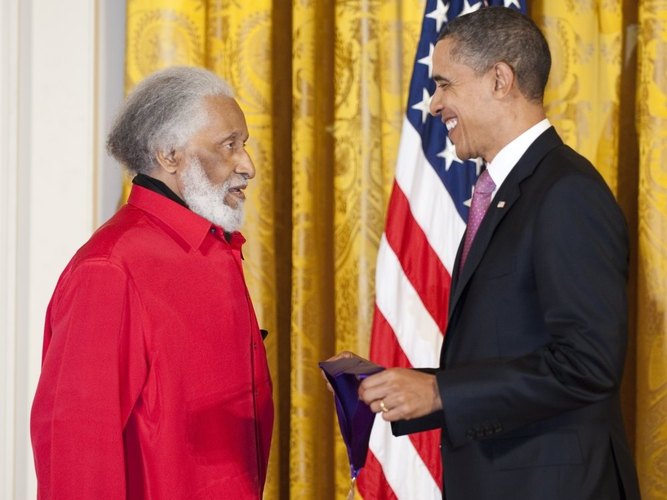 This week, Sonny Rollins (along with Quincy Jones) received the National Medal Of Arts.

The National Medal of Arts is the highest award given to artists and arts patrons by the United States Government.

After brief remarks, during which President Obama mentioned that he once owned Sonny Rollins albums on vinyl, Obama presented each award individually, while a short prepared statement was read. Here are the statement for Sonny Rollins:

Sonny Rollins for his contributions to American jazz music. Widely recognized as one of the most important and influential jazz musicians of the post-bebop era, Mr. Rollins’ melodic sensibilities, playing style, and solos have delighted audiences and influenced generations of musicians for over 50 years.

Here is a 30-minute BBC documentary about Sonny Rollins made in 1968. At the time, Rollins had retired from the jazz clubs and played his horn in the school with kids, in the woods with airplanes flying above and on the Williamsburg bridge with trains passing by!

Rollins was frustrated that the jazz music had to be performed in seedy clubs, where the lifestyle with alcohol, tobacco and drugs killed the musicians. A few years later, Miles Davis was playing in the Berliner Philharmonie.

The statements made by Rollins in the film, however, are still valid today and this is an absolute must see. Not only for jazz lovers, but also for life lovers!